In Ibiza town, the old part with its walls, well preserved, has been declared Patrimony of Humanity in 1999 by the UNESCO.

It lies on the highest elevation of Ibiza town at 85 meteres above sea level, with walls, watch towers and small historical districts with the typical white-washed houses. 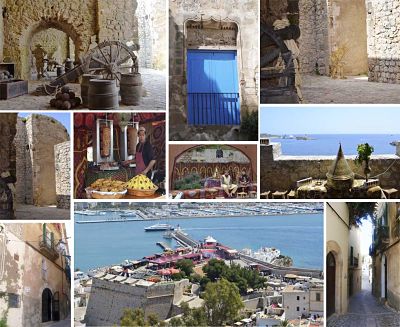 During its history, Ibiza has been invaded by Phoenicians, Punics, Romans, Byzantines, Vandals, Arabs and Christians, due to its important strategic situation in the Mediterranean between the
peninsular coast and Africa, being of interest to civilizations and empires.

"MADINA YABISA" The muslims called Ibiza Madina Yabisa and occupied the city in the year 902 after two decades of skirmish and independency, always under the pact of the Emirate of Cordoba.

During centuries, the ibicencos had to defend themselves against pirates and corsairs and the necessity obliged them to turn into farmers, fishermen and sailors until exploiting their Phoenician roots and getting into the touristic boom of the XX century, converting itself into a prosperous and open-minded society. 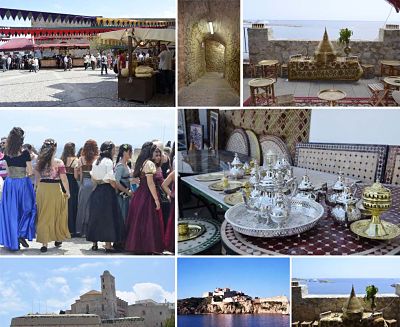 The declaration of the World heritage Site was given by Unesco to some cultural and environmental sites of Ibiza and Formentera (the only ones in the Balearic Islands with this recognition) These are: the enclosure of Dalt Vila, the Phoenician-Punic necropolis of Es Puig des Molins, the Phoenician settlement of Sa Caleta and the Posidonea prairies of the sea bottoms of Ibiza and Formentera.

Dalt Vila is considered a good example of fortified acropolis and its walls constitute a unique evidence of the different cultures that passed by. The village of Sa Caleta is considered the first Phoenician township of the island and it is of incalculable value for the study of this type of settlements and layouts.

The necropolis of Es Puig des Molins was the cemetery of the old city Aiboshim, it has 50 000 square meters and 3500 preserved tombs, and it is considered the biggest one in the word. 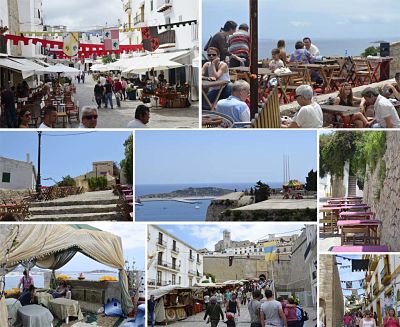 The story of Ibiza and Formentera goes back to the second half of the 7th century B.C., when the Phoenicians settled in the village of Sa Caleta and later in the area of Dalt Vila and called the island Ibosim (Land of “Bes”- one of their gods). Seven centuries later, Ibiza became part of the Roman Empire.

After the Byzantines, the Arabs occupied the island in the beginning of the 8th century, becoming “Yabisah”. Finally, the 8th of August of 1235 Guillem de Montgrí, Pere de Portugal and Nunó Sanç conquered the island for the Catalan-Aragon Kingdom. Nowadays, this culture is still alive and enriched by a special cultural sedimentation, which is unique in the world.

Guide to planning a wedding on Ibiza

Tennis and padel clubs on Ibiza

Itinerary for 3 days in Ibiza